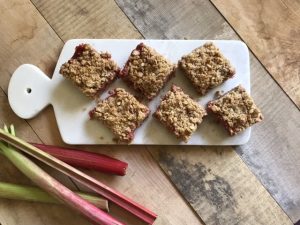 There is a corner in my backyard that belongs to the rhubarb. Every year when I see the little leaves pop up after the last snow, I know spring has arrived. 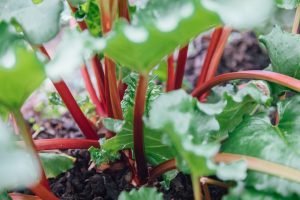 Rhubarb is a perennial that is eaten as a fruit, although botanically it is a vegetable. While usually cooked, I remember eating it raw as a child, dipping the long stalks into a bowl of sugar, one dip for every bite. It is very tart – an eye-squinting, mouth-puckering tartness.

A co-star in the classic strawberry-rhubarb pie, it is often paired with strawberries or other sweet fruits in cobblers, crisps, compotes or preserves.

Historically, rhubarb root was used medicinally (as a laxative) in China over 5,000 years ago. It’s use in cooking didn’t start until the 19th century, in Britain. It became wildly popular for use in desserts and wine prior to World War II, then quickly dropped out of favour, most likely due to sugar rationing.

A word of caution, the leaves of the rhubarb plant are toxic due to high concentrations of oxalic acid.  Granted, one would have to eat at least 5 kg for it to be lethal in humans, but best not to test that. Keep pets away from the leaves as well.

Nutritionally, 1 cup of uncooked rhubarb contains 26 calories, 1.1g of protein, 0.2g of fat, 5.5g of carbohydrates, 2.2g of fiber, and 1.3g of sugar.  It is a good source of Vitamins C and K, potassium and manganese. It is surprisingly high in calcium and also a good source of magnesium.

These vegan rhubarb bars are the perfect compliment of sweet and tart and are lovely with a cup of tea. 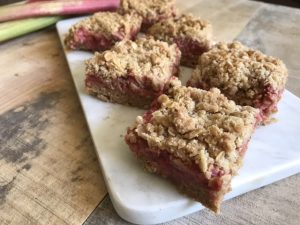 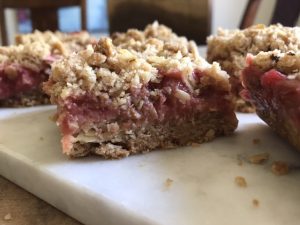 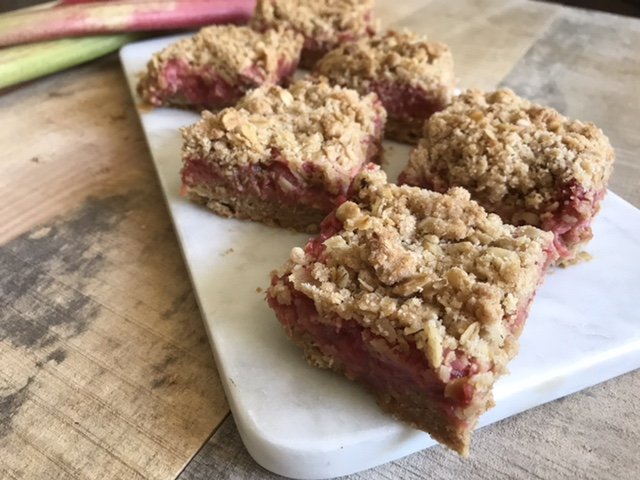